One Marquart family now living in Brazil trace their ancestors to the Volga Germans while another of Polish (East Prussian) descent are now in New Zealand and claim to be of Jewish ancestry.  So I have included the following for researchers of this line.

Migration routes, numbers and and dates.

In a place far from the geographic heart of German culture, on the lower reaches of the Volga River in the southern part of European Russia, there once existed a separate republic for Russia's Germans.  The story of how these Wolgadeutsche or Russlanddeutsche (Volga-Germans or Russian Germans) came to live in Russia and later leave it again, is a now largely forgotten part of European history.

That story starts with one of Russia's most influential monarchs, Catherine II the Great (1729-1796), whose enlightened rule lasted for almost the entire last third of the 18th century.  Yekaterina, as she was known to her subjects, was born in Stettin as Sophie Fredericke Auguste von Anhalt-Zerbst, a German princess.  In 1762, she invited Western Europeans to immigrate to Russia to farm and develop the sparsely inhabited parts of her Empire, promising them they could maintain their language and culture.

Whether or not there was a special link between her country of birth and the direction of her plea, I do not know.  Fact is, it was mainly Germans who responded to her offer - Germany suffering from large-scale poverty at the time, other European nationalities preferring emigration to America.  Additionally appealing to religious communities such as the Mennonites was the promise of exclusion from military service - later revoked, causing an emigration wave of Volga-Germans to the Americas (where many settled in the Plains areas of the US and Canada, where they could practice agriculture in a similar way as in their ancestral areas).

The Nationalities Policy established after the Communist Revolution of 1917 provided for limited territorial autonomy for many of the 100-plus non-Russian peoples living in what was subsequently called the Russian Soviet Federative Socialist Republic (RSFSR).  For the Volga-Germans, this meant the formation in 1924 of the Volga-German Autonomous Soviet Socialist Republic (VGASSR; in German Autonome Sozialistische Sowjetrepublik der Wolgadeutschen - ASSWD; in Russian Avtonomnaya Sovietskaya Sotsialisticheskaya Respublika Nyemtsev Povolzhaya - ASSRNP; Communists preferred their acronyms without too many vowels).

The capital of the Volga-German Republic was Pokrovsk (known in German as Kosakenstadt), renamed Engels (after the German Communist theoretician) in 1931.  The area counted about 2 million inhabitants - Germans, Russians and others - at the turn of the 20th century. When the Volga-German Republic was formed, the population was at least 1/3 lower: the deeply religious Volga-Germans (mainly Lutherans) came into conflict with the anti-religious Bolsheviks.  Many Volga-Germans sided with the 'Whites' during the Russian Civil War (1917-1922) which was won by the 'Reds'.  Pastors were sent off to Siberia, many Volga-German towns were fiercely attacked by the Reds, many civilians died in the famines of that period.

After the Civil War, a limited amnesty was declared by the Communist authorities, and German language was promoted officially.  According to the 1939 census, the Volga-German ASSR counted just over 600.000 German-speaking inhabitants.  The death-knell of 'Germany-on-the-Volga' was sounded by Nazi-Germany, when it invaded the USSR in 1941.  The Volga-German ASSR was disbanded. All Germans living in the Soviet Union were declared enemies of the state, and exiled further from the potential front, mainly to Kazakhstan. Other nationalities, notably the Krim Tatars and the Chechens, suffered the same fate.  After the war, many Volga-Germans had to sign declarations promising never to return to the Volga area.

The Stalinist decrees of banishment and cultural oppression were reversed in the 1950s and '60s, but the Volga-German ASSR was never re-established.  After the fall of the Soviet Union in the early 1990s, many ethnic Germans took advantage of a German law allowing an easy 'return' to the Heimat of people of German descent (mainly in Eastern Europe and the former Soviet Union), thus effectively ending the brief speculation of re-establishing some sort of Volga-German autonomy, and more broadly, several centuries of German presence in Russia.

The map legend indicates German towns with a red dot, Tatar towns with a crescent, Russian towns in the ASSR with a black and without it with a white dot.  A separate dot colour, unfortunately indistinguishable from the Russian black on this map, indicates Estonian towns. The map legend further seems to indicate that each canton either had a Russian or a German capital city.

Some towns with unmistakably German names include: Frankreich, Alt Weimar and Strassburg (in Pallasowka canton), Friedenberg (in the mainly Russian Staraja Poltawka canton), Brunnental and Warenburg (in the apparently bilingual Seelmann canton), Unterdorf and Rosenberg (in the heavily German Kamenka canton),and Schöndorf, Schönfeld and Schöntal (in what must be the very picturesque Krasny Kut canton). 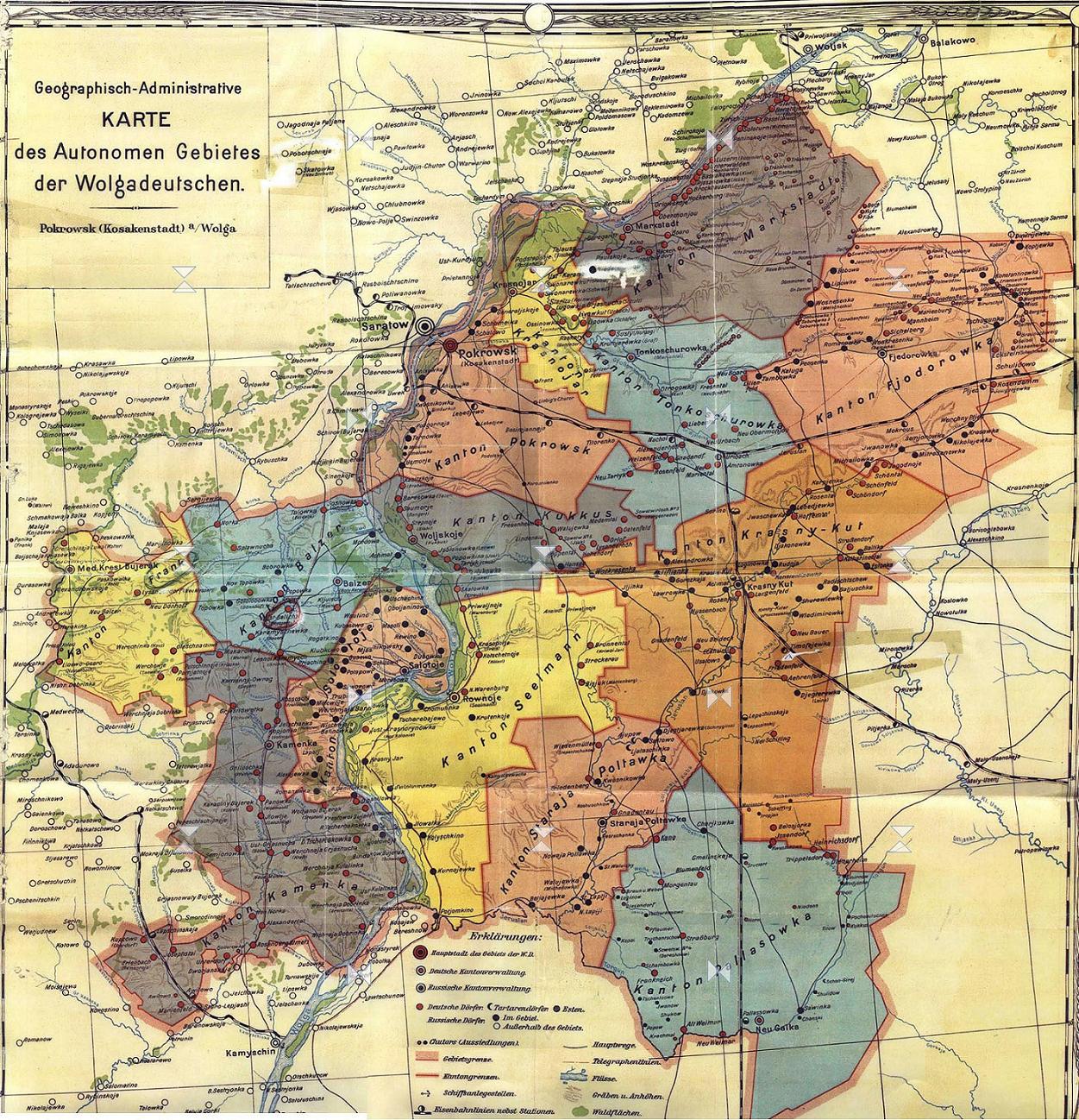 The above text was copied from an anonymous internet blog.